In illustration, bleed is art that goes beyond the edge of where the page will be trimmed. This ensures that the art will cover the entire page. By illustrating with bleed, artists make the art bigger than it needs to be. The same can be said of short story writers.

In the short story The Lottery, author Shirley Jackson focuses on one moment in the lives of the villagers at the center of her narrative. Although the story ends, the characters’ lives do not. There’s aftermath the reader doesn’t get to see because the main action—the story—has already been told. If we were to ask Ms. Jackson what happened to the villagers afterward, she would have an answer. Not a solid play-by-play of each character’s whereabouts perhaps, but enough of an understanding that extends past the short story’s end—that’s the bleed!

My short story, The Baby in the Bathwater, was written with bleed: Zed survives the fall into the dumpster and makes it to the pay phone on the street corner where he tries to call Ryan. He reaches for a quarter to make the call but realizes his wallet and phone are upstairs. Instead he decides to find Cole, knowing there’s a strong chance he’s nursing his worries at the local bar. That’s as far as I thought out to write my short story.

Does Zed go to prison for murder?

Do Ryan and his girlfriend get back together?

That stuff’s beyond the bleed, beyond what the story needs and the reader needs to know.

After taking a stab at short story writing and mulling over my thoughts on bleed here, I’ve found I enjoyed writing the bleed as much as I enjoyed writing the story. Zed and Ava’s history started off as bleed, then evolved into backstory that made it into the actual story. It’s fun to explore beyond the edges of your art and paint a bigger picture than your story provides—this way if your reader toes the line or gets the chance to ask you what’s beyond it, you’ll have answer. 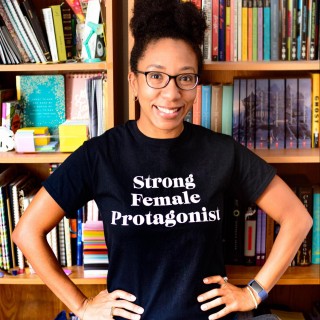 I'm a writer, avid reader, and associate editor in children's book publishing. I blog about the writing process, books, movies, and the things that stick to me. I enjoy stories with strong female protagonists, puns, and popcorn. Please visit my About Me page for more.